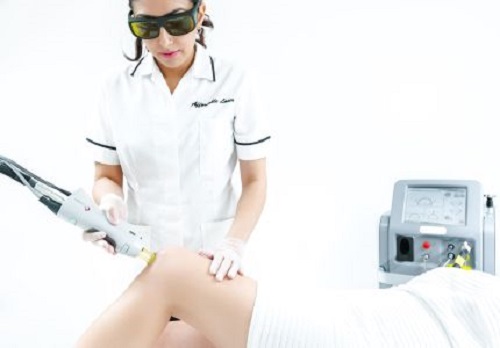 They are not the same

This may be obvious to some but others (like me) may be thinking they are just two names for the same thing. IPL stands for intense pulsed light and like laser treatments, there is light energy produced for absorption into the hair melanin in order to damage the hair follicle. Both treatments for hair removal are near permanent and have devices for home and professional use.

However, there is one major difference between these two. Laser treatments involve using an actual laser to damage the follicles while IPL only uses light, which converts to heat that damages hair follicles. It is this difference in technology ultimately bringing in the difference in effectiveness.

So here’s a quick look at effectiveness of IPL versus laser-based machines based on their technologies.

Both produce considerable amount of heat. However, lasers produce more heat directed at the hair follicle due to the ability to be concentrated into a single beam.

IPL machines are known for shallow penetration, which causes damage to the epidermis while missing the deep seated thicker follicles. Lasers are specific for the follicles and are adjustable to achieve deep penetrations.

Given the lack of specificity in targeting and inability to the concentrated, the heat from IPL has previously caused serious damage to people with darker complexions. Lasers are generally safer than IPLs for darker skin tones, although keeness on which laser wavelength and intensity to use is necessary.

IPL’s non-specificity allows its use for skin treatments such as tattoo removals and treatment of fine blood vessels. Lasers, however, are not as diverse in their use.

As a result of these differences in technology with regard to hair removal, laser technology trumps IPL. It is more effective, giving permanent results in just 3-5 sessions while IPL takes much longer.

Laser precision allows for clear targeting of the hair follicle melanin meaning dealing of dark, coarse skin without any damage to the surrounding epidermal melanin. IPL cannot offer such clear targeting, limiting its use to lighter skin tones where lasers can be used for virtually any skin tone.

A single laser beam can treat many hairs with one single shot, which takes only a fraction of a second. This means that lasers are useable on large areas of the body effectively. However, this is not the case for IPL, which can only do as few hairs at a time over selected areas of the body.

So while IPL may be cheaper, it is certainly the least effective of the two hair removal technologies. However, you can choose whichever technology is safest and most convenient for you based on your preferred outcomes.